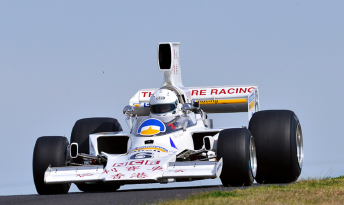 Richard Davison, the father of V8 Supercars stars Will and Alex, scored pole position for the Formula 5000 Australia Cup’s maiden appearance alongside the touring car class at Sandown.

Driving an ex-Alan Jones Lola T332, Davison recorded a best time of 1:06.98s late in the brief 10 minute qualifying session to be more than two seconds faster than the best V8 Supercar time of the day.

“When I ran here before, I was in the 1m09s, and I hoped to get into the eights to match what the boys will probably do in their V8 Supercars, but I had no concept that the time was that good until I stopped!

“Now all I want to do is break the bogey from the opening round (at the Muscle Car Masters two weeks ago), where I went out on the opening lap …”

Sharing the front row for Race 1 of the weekend at Sandown will be Aucklander Andrew Higgins (Lola T400), whose 1m08.0920s lap just shaded series leader Tom Tweedie (Chevrron B24/28).

Tweedie had been the favourite for pole prior to suffering fuel injection problems during the session.

In more serious mechanical trouble was Ken Smith, with the veteran Kiwi’s Lola suffering a differential failure in practice. The car is expected to return in time for Saturday’s first race.

It was even tighter at the top in the Utes, where the Ford of David Sieders proved just 0.003s clear of Nathan Pretty’s Holden.