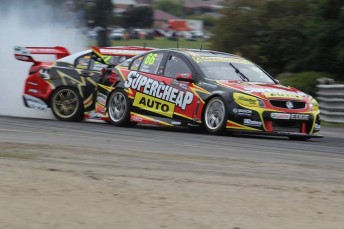 The Dunlop Series race winner became the first driver of the weekend to dip into the 1:09s in the closing stages of the 40 minute hit-out.

Perkins, who is teamed with Scott McLaughlin for the Pirtek Enduro Cup, bumped Steven Johnson from the top of the order by clocking quick times on his final two tours.

Steve Owen also joined Perkins in the 1:09s, while Johnson and Andrew Thompson ensured a repeat of Erebus’ morning effort of having two Mercedes entries in the top four.

Walkinshaw Racing stable-mates Greg Murphy and Ryan Briscoe ensured some excitement early in the session, with Murphy spinning into the rear of the latter’s Holden at Turn 1.

Briscoe, who had not appeared in the opening session, spent almost 30 minutes in the garage while the team made repairs. 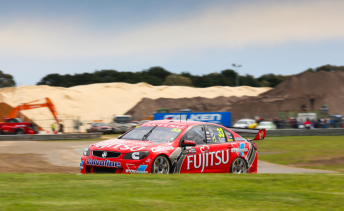 Jack Perkins set the fastest two times of the session

Murphy, who had also been forced to the pits with a damaged rear toe-link, later told Speedcafe.com that he’d simply thought that Briscoe had been planning to let him through.

The session was punctuated by a lengthy red flag to retrieve the Norton Nissan of Taz Douglas, which stopped on the circuit after shedding a wheel.