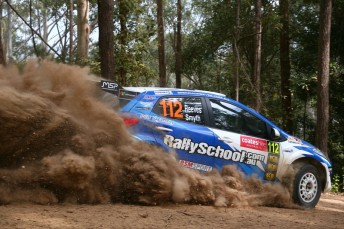 Renault driver Scott Pedder rolled out of the outright battle leaving his team mate Tom Wilde and Mazda rival Brendan Reeves to try to chase down Eli Evans in the Australian Rally Championship round at Coffs Harbour.

At the end of the first full day of competition at Coates Hire Rally Australia, Eli Evans has assumed a comfortable 19.4s lead.

“I really attacked the first stage and I got into a groove from there,” Evans said.

“This year I’ve really tried to start strong and get a rhythm going, but you just push and see what happens from there.”

Evans explained that the day had unfolded without drama although he was taken aback by the amount of tyre wear at the start of the day, opting for the medium compound Kumho instead of the more durable hard compound.

“We saw some extraordinary tyre wear today. So we gave some time away to the Renault’s (of Scott Pedder and Tom Wilde) on the second and third stage before we could get back to service,” Evans said.

Teammates Pedder and Wilde spent the opening stages with one eye on Evans but also another eye on each other, the pair trading second and third place outright throughout the morning.

In the end Pedder would gain the upper hand over Wilde until the sixth stage, Tuckers Nob, when Pedder ran wide.

“We clipped a little bank and it tipped over,” co-driver Dale Moscatt said.

“We were about three quarters of the way into the stage and we had to wait a couple of minutes for some volunteers to help us tip the car back onto it’s wheels.”

“Because we’d already lost a bit of time we knew Tom (Wilde) would be close, so we waited for him to pass, we didn’t want to impact his chance to fight for the lead.

“In the end we probably lost over five minutes, and we had to kick the windscreen out because it was so badly damaged. The car looks bad but mechanically it’s fine.”

With Pedder dropping well down the order, Wilde set about chasing down Evans but immediately began to come under pressure from Brendan Reeves in the Mazda2.

By the final two stages of the day, back in Coffs Harbour at the spectator Super Special, Reeves held the upper hand in second.

“We had tyre issues this morning, we went for the medium compound like a few others and it proved to be the wrong choice. They were nearly destroyed at the end of the first stage alone,” Reeves said.

“The car has been great today and it keeps going from strength to strength. The changeable road surface has been the hardest part today, it’s been very, very tricky.”

Currently in third Tom Wilde may find his time changing overnight after he and Jack Monkhouse, were both handed a derived time for Special Stage 5 following yellow flags for a medical crew that were attending to a crash car from the World Rally field.

“Tom (Wilde) had an FIV pull into the stage in front of him,” explained Monkhouse. “I think Tom had yellow flags waved in front of him, but by the time I started the stage I was told it was all clear. I saw the crashed car, then I caught a heap of dust and spent 15km on Tom’s rear bumper.”

VIDEO: Leading crews talk at the end of the opening Leg