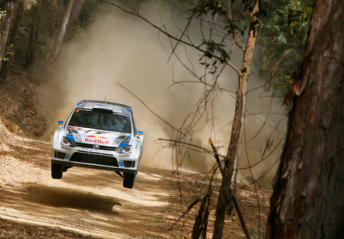 Ogier managed to squeeze out a small but increasing advantage over his challengers to guide the Volkswagen Polo R WRC he shares with Julien Ingrassia to an 18.4s lead.

The VW ace, as was the case in the morning, remained unbeaten in the three afternoon stages.

Citroen’s experienced Finn Mikko Hirvonen made a good fist of the day, finishing second overall and swapping positions with his team-mate Kris Meeke who is 25.9s behind.

Ford Fiesta RS driver Thierry Neuville began charge late in the day to finish second in the final 24.91km SS8 to be fourth overall 32.9s behind.

Ogier clinically picked off the stages as visibility became an issue in the final Newry run with officials deciding to blow the intervals out to four minutes (from three) between cars.

“It was technical and there was a lot of loose gravel and quite slippy. The visibility was not so good in the forest. The dust was staying in the air.

“I think it was a good move by the organisers to switch it during that last stage to four minute gaps.”

Mads Ostberg, sixth overall behind Jari-Matti Latvala, retold how he almost came to brief on SS8 after an encounter with a large rock.

“Through a right hander there was a massive rock in the middle of the road and the door came open,” Ostberg said.

“We almost went off the road into a tree. It’s a good thing I hit it sideways if I had it in the front that would be it.”

Local driver Nathan Quinn had a dream start in his maiden WRC rally by moving up a position to ninth, beaming after his efforts in the John Cooper Works Mini.

VIDEO: Highlights from the morning stages

VIDEO: Highlights from the afternoon stages