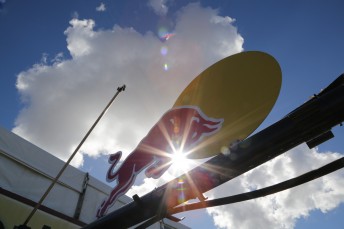 Red Bull Racing Australia’s two Holden entries are the bookmaker’s firm favourites for victory in the Sandown 500 despite their fluctuating fortunes in recent races.

The Jamie Whincup/Paul Dumbrell and Craig Lowndes/Warren Luff Commodores are priced at just $3 and $4.75 for the Sunday victory respectively with leading bookmaker Sportingbet.

The next most fancied cars, the two Ford Performance Racing Falcons of Mark Winterbottom/Steven Richards and Will Davison/Steve Owen, sit at the relatively long odds of $8 and $9 respectively.

Whincup has endured a torrid run over recent races, failing to score a top 10 finish in each of the last four encounters.

Having experienced a vibration in his car at both Winton and a pre-Sandown test at Queensland Raceway, Whincup is debuting a new chassis this weekend; becoming the first driver to move to a new car since the Car of the Future was introduced.

Suprisingly, last-start race winners the Holden Racing Team are being considered mere outsiders for victory at Sandown, with James Courtney/Greg Murphy at $17 and Garth Tander/Nick Percat at $19.

The new-for-2013 manufacturers, Nissan and Mercedes, are being rated as grid fillers, with the James Moffat/Taz Douglas Altima the highest up the list at $101.00.

The requirement to undertake four compulsory pitstops this weekend – a rule introduced to provide some hope to the four-valve engined cars – will make for a strategically interesting race.

Capable of completing the 500km on three stops, the Ford and Holden runners will now have big fuel windows to play with.

“It could have been a relatively straight forward race until they threw this curveball in,” notes Ford Performance Racing engineer Campbell Little.

“With four stops you’ve got more options to vary your stint lengths, where before it was mostly about extending your early runs to give as much flexibility as possible later on.”

There are no minimum time limits on the compulsory stops. Teams are required to simply remove two tyres or jack up and couple the fuel hose to the car in order to satisfy the regulations.

The possibility of starting the race in pitlane and therefore completing one ‘pitstop’ as soon as possible had tongues wagging in the paddock on Thursday. Any grey area in the regulations that would allow such a move are expected to be clarified before Sunday, however.

As usual, teams will attempt to complete their minimum co-driver laps as early in the race as possible, ensuring that the part-timers will almost certainly start each car.

Strategies will be shaken up further if predicted rain hits on Sunday. Patchy showers are expected in Melbourne across all three days of the event.

Tyres will be a factor regardless of whether, with the six allocated sets needing to be spread over qualifying, the two 60km qualifying races and the five-stint enduro.

Teams have been briefed on recommended tyre pressure and camber settings from control supplier Dunlop ahead of the event. Several failures have been seen throughout the season to date as teams run the set-up gauntlet; some reportedly starting races with as little as 9 psi in their tyres as they search for traction.

“Teams have to be very careful with pressures at Sandown because the kerbs are quite aggressive,” says Dunlop’s V8 Supercars operations manager Kevin Fitzsimons.

“We saw a lot of wear on the inside rear here with the old cars due to the way they drag the tyre. We’ll be monitoring how that translates to these independent rear-end cars pretty closely.”

Mechanical reliability concerns mainly surround the ever suspect transaxle gearboxes, which are sure to get their biggest workout yet over 500km of the notoriously punishing venue.

An upgrade kit has been made available to teams in recent weeks, although many have been reluctant to use new parts in the endurance events.

No cars have retired from V8 Supercars’ pre-Bathurst 500km endurance event thanks to a mechanical failure since 2010, such was the bullet-proof nature of the previous rule package.

The V8 Supercars field will undertake three 40 minute practice sessions today, where they’ll gain further understanding of their fuel consumption, tyre and brake wear, as well as refining set-ups for both qualifying and the race.