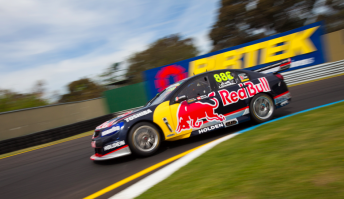 Eight cars eclipsed Will Davison’s practice lap record for the V8 Supercars at Sandown in the closing minutes of the third and final session of the day.

Will Davison had sat at the top of the order when the chequered flag flew, only to see Lee Holdsworth and then Lowndes lap even faster.

Davison, whose car was steered by co-driver Steve Owen in the final minutes, ended up third ahead of Scott McLaughlin, Alexandre Premat, Mark Winterbottom, Garth Tander and Alex Davison.

The 2013 specification ‘Car of the Future’ has proven slower than its predecessor throughout much of the year, with resurfacing of several corners clearly contributing to today’s speed.

Brock meanwhile won each of his nine trophies at the Melbourne venue.

A final practice session will take place on Saturday morning ahead of a 20 minute qualifying session and two 60km qualifying races.