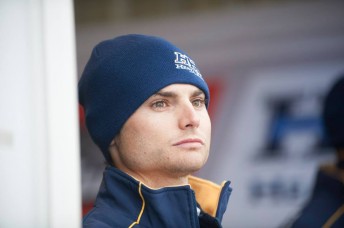 Erebus Motorsport has officially confirmed that Tim Slade will leave the team at the end of 2013.

As reported earlier this week, Slade is expected to join Walkinshaw Racing next season in place of Russell Ingall.

Finishing fifth in last year’s championship having scored a maiden pole position at the Sydney season finale, the 28-year-old has been mired in the pack this year as the squad develops its E63 entries.

“When entering V8 Supercars this year, Erebus Motorsport took on a number of pre-existing contracts from the previous ownership,” said Maddison in a team statement.

“We’ve always been aware that it was going to take time to shape the organisation in line with the long term brand vision of Erebus Motorsport.

”Despite some robust negotiations, we weren’t able to reach agreement with Tim, he has been open and professional throughout the entire process, which is exactly what we expect from anyone involved with Erebus Motorsport.

“The motivation of our crew is higher than ever and each team member wants to come to the end of this year with the strongest possible results.”

Erebus’ statement noted that the team “is of the understanding he will be joining with Walkinshaw Racing from 2014”.

The license that Slade’s car competes under is owned by his long-term backer James Rosbenberg under a deal that also expires at the end of the season.

Rosenberg and an Erebus Motorsport spokesman both told Speedcafe.com earlier this week that they hope to continue the arrangement into 2014.

“I’m still talking to Erebus but at this stage I see no reason why I won’t be continuing on there, regardless of what Slade does,” said Rosenberg.