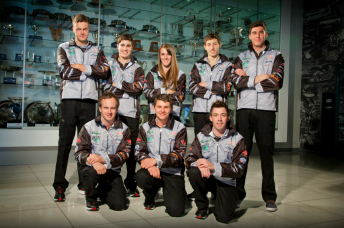 The full field of contestants for the third season of the Shannons Supercar Showdown reality television program have been revealed ahead of the show’s return on Saturday.

As previously reported, the Media Mix-created program has been heavily rejigged for this season.

After two years under the auspices of Kelly Racing in which the winner was offered a ride in the Bathurst 1000, the show has this year partnered with Ford Performance Racing.

The young drivers are competing for a ‘testing contract’ with the team, as well as a one-off Dunlop Series appearance.

The second element of the prize is expected to take place in the 2013 season finale at Homebush, where Minda Motorsport will field the winner in a third ex-Garry Rogers Motorsport Holden chassis.

The driving challenges in the show, which include runs in the Ford Performance Racing Falcon campaigned in the Dunlop Series by Chaz Mostert last year, were filmed at Calder Park.

Fronted by the host of Speedcafe.com’s recent Crimsafe Endurance Countdown, Briony Ingerson, the first episode of the series will screen on 7mate tomorrow (Saturday September 14) at 1700.