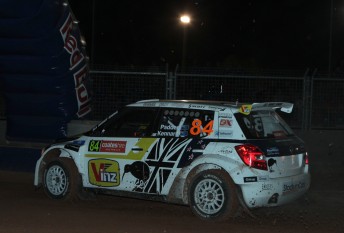 Kiwi driver Hayden Paddon’s chances of victory in the WRC2 class came crashing down when his Skoda developed an electrical hitch on the opening day of Coates Hire Rally Australia.

The Skoda Fabia S2000 was sidelined on its way to the opening SS3 Tuckers Nob 8.44km stage.

The drama developed during the previous night’s super special stages at Brelsford Park however in the short morning service the Kiwi crew were unable to rectify the drama.

Paddon and co-driver John Kennard stopped on the side of the road on their way to the stage south of Coffs Harbour.

It was a bitter result for Paddon who had shown form in the previous two rounds at Finland and Germany where the Skoda finished third in its class.

Paddon is now looking to re-enter the event on Saturday under the Rally 2 rules however the exact nature of the problem remains a mystery.

“After the first run around the super special stage last night there was a lot of current being drawn out of the car and we were losing battery voltage,” the 2011 PWRC champion Paddon explained.

“This morning we did the best job we could to try to fix it. We went through the whole electrical system and replaced the battery and some components, but unfortunately on the way to the first stage the car stopped.

“We will try to fix it and if we do get back out tomorrow there will be a bit of anger behind the wheel, obviously controlled anger, but there will be no holding back. We want to try to make something from the weekend,” said Paddon.

Paddon had earlier warned that his team were treadinga fine line between car preservation and competitive pace given a lack of spares in key mechanical componentry.