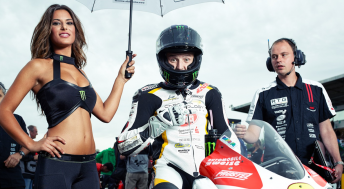 Miller is riding a Caretta Technology FTR Honda this season, currently sitting seventh in the standings after a series of impressive rides on the unfancied bike across the opening 11 rounds.

Following a promising 2012 that included a podium finish on home ground at Phillip Island, Sissis has largely failed to fire this year, currently sitting 11th with just two top 10 finishes.

While Salom’s scheduled graduation to Moto2 next year provides the vacancy for Miller, Sissis will likely come under pressure from the latest batch of Red Bull Rookie Cup stars if he is unable to shine in the remaining six races of 2013.

Bryan Staring is currently Australia’s only representative in the MotoGP World Championship, riding a Gresini FTR Honda in the Claiming Rule Team class.