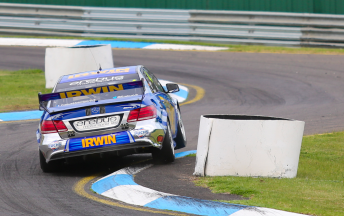 Mercedes-AMG heavyweight Tobias Moers has ramped up the pressure on Erebus Motorsport, declaring that the team must win races in order for the V8 Supercar program to continue.

Erebus has entered the championship this year under a customer deal with the Stuttgart, Germany, based AMG motorsport division.

The two-year agreement, which went ahead despite heavy reservations from Mercedes-Benz Australia, was a bold step from AMG, which has traditionally enjoyed in-house control of its motorsport activities.

The development of the E63 V8 Supercars has proven a challenging process to date, with the project suffering from the tight timelines involved in getting the cars to the season opener.

Although making strong progress since solving its engine driveability issues in May, the team’s car speed has been inconsistent, with podium finishes elusive.

Tobias Moers, who earlier this week was promoted from product chief to CEO at AMG, has stressed that there is still much work to do on the cars.

“That’s a complicated question,” Moers told CarAdvice when asked whether AMG is happy with Mercedes-Benz AMG’s representation on the V8 Supercars grid.

“Honestly… no we’re not today, it’s not really good where we are today in that race series, that’s clear, there is no sense to talk about we’re happy with that. No, we’re not happy.

“The thing is when Erebus started … the target was one of the first (top) 10 (finish). Get that and then the chequered flag is coming.”

Noting that some areas of the current engine regulations, particularly the mandatory 10:1 compression ratio, may need to be reviewed by the category to help those running four-valve engines, Moers left no doubt as to what the project must achieve in order to be given the green light to continue into the future.

“The aim is to win. If you race a car in a race series you have to win, you have to believe that you sometimes can win.

“So we’ll have to discuss with the team another time. But there’s always a discussion going on, there must be a breakthrough sooner or later, that’s clear.”

Erebus made a strong start to its Sandown 500 campaign on Friday, with its Tim Slade/Andrew Thompson entry topping opening practice.

The sister Maro Engel/Steven Johnson and Lee Holdsworth/Craig Baird E63s also appeared in the top three throughout the day.

A late ‘green’ tyre run left Holdsworth just 0.03s shy of eventual pace-setter Craig Lowndes in the final session; a performance which proved some relief for the IRWIN-backed driver after being thoroughly outpaced by Slade in qualifying over recent events.

“Our weakest point was green tyres before this and we worked on that at the test day we had last week,” said Holdsworth.

“We took a different direction (with set-up), which worked.

“It’s nice to feel what a green tyre is like again. We’ve been in the top 10 in practice most of the time for the last couple of rounds and seen it all go out the door in qualifying.”

The team’s cars will likely figure prominently in qualifying and the two 60km qualifying races on Saturday, but are expected to be up against it for Sunday’s 500km enduro due to their poor fuel economy.