Ten years of Triple Eight book gears up for release

Ten years of Triple Eight book gears up for release 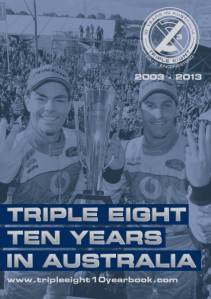 From its humble beginnings starting at Sandown in 2003 after taking over the John Briggs operation in Brisbane, to four driver’s championships and five Bathurst 1000 crowns, the squad has one of the most enviable strike-rates in Australian touring car/V8 Supercar history.

Contents of the book focusses on highlights from each year where key figures in the team retell inside stories.

Along with a collection of in-depth and compelling stories, there are stand alone interviews with drivers and exclusive content from team personnel.

The team has steered away from the obligatory race review style format to document stories fans want to read about.

Penned by Paul Gover, the book is expected to be released by late February, 2014.

The team starts accepting orders today and purchasers can pre-order at www.tripleeight10yearbook.com