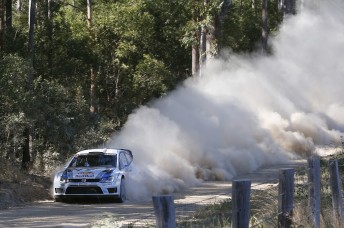 Officials have moved swiftly to extend the intervals between competitors after crews raised fears that dusty conditions had compromised safety on the eve of Coates Hire Rally Australia at Coffs Harbour.

Clerk of the Course Adrian Stafford issued a bulletin within two hours after qualifying to all competitors that the P1 and P2 drivers will start at three-minute intervals with the remaining drivers starting at two-minute gaps.

Meeke, the fastest in qualifying in his works Citroen, made a plea that the gap should be increased.

“We need the bigger gaps out there. I don’t think it’s hurting anyone to have longer gaps,” Meeke said.

Ogier, the Volkswagen factory sensation who is on the brink of being crowned world champion this weekend, concurred.

“I definitely think it’s wise to have bigger gaps. We need to make it as safe as possible,” Ogier told Speedcafe.com

Predictably Meeke has elected to start on the road 10th for the opening special stage with Ogier ninth followed by Neuville in reverse order to the qualifying positions.

Local Nathan Quinn in the Motorsport Italia-prepared MINI will become the road sweeper as first to blast off.
Ahead of the WRC field are 353km of competitive driving across 22 special stages from tomorrow.