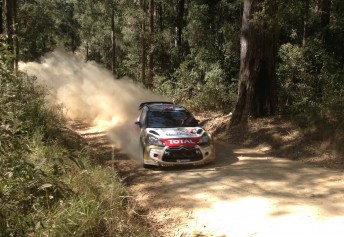 Irishman Kris Meeke is seizing the opportunity to cement a full-time place in the World Rally Championship after topping qualifying for Coates Hire Rally Australia.

Thierry Neuville (Ford) is the closest to Ogier in WRC points going into the Australian rally and was third fastest.

Meeke and co-driver Chris Patterson are looking to make a statement in their DS3 for the Citroen Total Abu Dhabi World Rally Team. They are literally driving for a manufacturer gig in the 2014 WRC.

“It was a nice morning and quite a nice stage and it was still a bit slippery,” Meeke , a Citroen guest driver, explained.

“When I heard Seb’s (Ogier’s) time over the radio on my way to the stage I thought that was going to take some beating.

“You really work hard all your career to get a factory drive. Everything depends on my result at Rally Australia for my future.”

Mads Ostberg, Andreas Mikkelsen, Mikko Hirvonen and Evgeny Novikov were next in the qualifying order.

The drivers will choose the position they will start on the road later today.