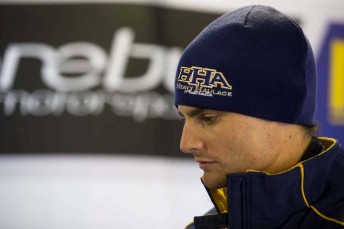 Speculation that Tim Slade will depart Erebus Motorsport at the end of the year has intensified ahead of the resumption of V8 Supercars action at Sandown this weekend.

Slade’s future has been under the spotlight for some months, with the Mercedes-Benz outfit repeatedly making it clear that it is keen to retain the rising star.

Despite appearing close to a new deal prior to Winton, sources suggest that Erebus has now been informed of Slade’s impending departure.

Moving to Walkinshaw Racing, which has already re-signed James Courtney and poached former Triple Eight team principal Adrian Burgess ahead of 2014, has long been mooted as Slade’s alternative to staying at Erebus.

All parties involved were remaining tight-lipped on the situation when contacted by Speedcafe.com on Tuesday.

“I’m getting pretty close to having it all sorted and hope to have something to announce fairly soon,” said Slade of his future.

Erebus, through its team manager David Stuart, declined to give any comment on its position with Slade, while a Holden Motorsport spokesman confirmed only that no driver has yet been formally signed on to replace Russell Ingall in Walkinshaw’s third car.

The team, whose owner Ryan Walkinshaw is expected to fly to Australia for an extended stay across the Pirtek Enduro Cup period, announced pre-season that 2013 would be Ingall’s final year in the championship.

Moving away from Erebus would almost certainly see an end to Slade’s professional relationship with long-time backer James Rosbenberg, who owns the Racing Entitlements Contract that the driver has competed under during his four years within the formerly Stone Brothers Racing squad.

The South Australian had been known to be frustrated with Erebus’ struggles earlier this season, but now says he’s likely to remain with the team into 2014.

“I’m still talking to Erebus but at this stage I see no reason why I won’t be continuing on there, regardless of what Slade does,” he told Speedcafe.com.

“There have been other opportunities out there but my preference and desire is to stay with Erebus. I think they’re on the right path now.”

A host of RECs remain without solidified homes for the new season, ensuring plenty of options remain available for Erebus should it wish to take up its previously stated aim of expanding to four cars.