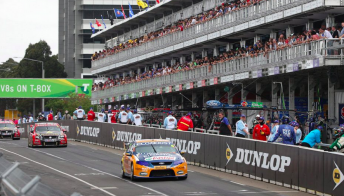 The Sydney street race at the Olympic Park venue has been extended after V8 Supercars successfully struck a fresh three-year contract with the NSW government.

It comes after Warburton was instrumental in a similar effort to successfully cut new deals for the Queensland street races in Townsville and the Gold Coast.

Under the terms of the new contract, the government will have the option to extend the arrangement with V8 Supercars for a further two years after 2016.

“The events are expected to attract more than 5,000 interstate and international visitors and 15,000 intrastate visitors and, over the three years, bring an estimated $50 million to our State.

“It will also be seen by millions of people throughout Australia and the world thanks to a live broadcast by Channel 7.”

He said that the new agreement would deliver significant exposure for the State with naming rights for the V8 Supercar Test Day presented by Sydney.com.

Vignettes promoting the Sydney 500 event will feature throughout the television broadcast for other races in the V8 Supercars Championship Series with video postcards of Sydney featuring throughout the live broadcast.

Minister for Sport and Recreation, Gabrielle Upton, said the V8 Supercars is an integral event on the NSW sporting calendar.

“Sydney Olympic Park is recognised around the world as Australia’s premium sporting precinct and the decision to continue to stage the V8 Supercars Championship finale there is a win for the fans and the NSW economy,” Minister Upton said.

As part of the deal the Sydney Motorsport Park circuit formerly known as Eastern Creek will be the venue for the designated category pre-season test day for the next three years.

V8 Supercars chief executive James Warburton said: “Securing the Sydney 500 V8 Supercars Grand Finale at Sydney Olympic Park for at least another three years will mean motorsport lovers will be able to experience a truly exciting race in a unique venue which brings the precision of the V8 drivers to a challenging course that really delivers entertainment for the fans.

“The V8 Supercars Test Day, another exciting fixture for Western Sydney at Sydney Motor Sport Park, will give fans the first reveal of the line-up of cars and drivers for the new season.”

Sydney, like the Townsville and Gold Coast events, had come to the end of its contract this year after its initial five-year term.

Central to the new Olympic Park deal are plans to host a twilight race that would finish around 8.30pm.

“Besides providing a multitude of motorsports fans with a wonderful experience, these two events will also provide many jobs and inject millions of dollars into NSW,” minister for Tourism and Major Events, George Souris told News Limited.

The Sydney street race began in 2009 when it attracted bumper crowds in its first year.