Ogier: WRC crown in my hands

Ogier: WRC crown in my hands 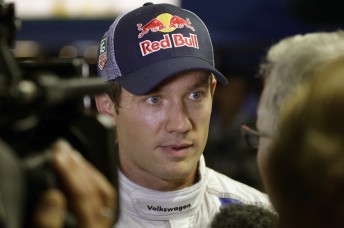 French ace Sebastien Ogier has two goals leading into Coates Hire Rally Australia at Coffs Harbour and the third one – winning the World Rally Championship crown – should look after itself.

Ogier needs to collect nine points more than his nearest rival, Ford driver Thierry Neuville to be assured of winning the WRC title with three rounds to spare. He also needs to pick up one more point over his Volkswagen team-mate Jari-Matti Latvala.

If he does so it will mean that Volkswagen will become the first German manufacturer since Audi through its iconic quattro carried off the WRC crown in 1984 with Stig Blomqvist at the wheel.

Other scenarios at the second edition of the Coffs Harbour-based WRC mean that if Ogier wins both the rally and the closing Power Stage, Neuville would need to finish second in both of the aforementioned to keep the title alive.

Ogier, who saw Dani Sordo claim his first WRC win at the previous event on tarmac in Germany, says his fate is much more reliant on himself and co-driver Julien Ingrassia in their Polo R WRC at Rally Australia.

“Whereas it was only really a theoretical chance in Germany, we now have a realistic opportunity to secure the title with races to spare,” Ogier said.

“In Australia it is, to a much greater degree, in our own hands.

“I would like to win both the rally and the closing Power Stage. That is my goal. And the advantage is that I really like the Rally Australia.

“The special stages are very quick and very demanding. We are well prepared for this challenge. I am looking forward to this rally.”

Of the 10 WRC-spec cars entered the only one not to be using the Michelin Latitude Cross tyres is local driver Nathan Quinn who is running the DMG+2 gravel tyres from DMACK.
Each crew will have 32 hard-compound tyres available, plus an alternative of 16 soft-compound tyres while each competitor is allowed to use a maximum of 32 tyres across both compounds for the entire event.