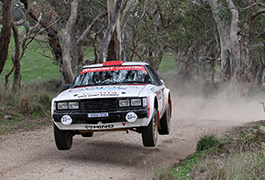 One of the most formidable domestic combinations in history will be re-united when Coral Taylor resumes calling the pace notes for Neal Bates at Coates Hire Rally Australia at Coffs Harbour.

Taylor had to forego her seat beside Bates at the previous round of the Australian Rally Championship in Queensland due to a clashing overseas commitment.

Together Taylor and Bates have won the national rally crown four times with the ace co-driver rearing to get back into battle in the classic Toyota Celica RA40.

Bates’ son Harry stood in for Taylor at the Queensland event with the pair winning the classic section by more than five minutes.

“Harry did too well while I was away!” Taylor smiled.

“I had to fight him off to get my seat back!

“Honestly it’s great to be back, especially for Rally Australia where we have the world rally teams and cars, and a huge field of classic competitors.

“We have a good chance of helping Neal take the lead in the championship; he is only six points behind Mark Beard, and the leader Fro Horobin is most likely out of the running after he unfortunately crashed his car quite badly.”

The ARC round runs at the Rally Australia event which is round 10 of the World Rally Championship.

The WRC round is held biennially on a rotational basis with Rally New Zealand.

The Australian Rally Championship and classic category cars, which include Bates and Taylor’s Celica, will run behind the world rally cars on the road.

With the area parched dust is expected to become an issue with competitors set to struggle with visibility.

“It hasn’t rained much at all up here recently so it will be extremely dusty, especially as we are running at one minute intervals,” she said.

Bates added that he was confident about posting a strong result after a promising test session earlier in the week.

“We made some really good changes to the suspension set-up and the car feels great,” Bates said.

“We’ll face some really good competition with 28 cars in the classic field, and in general I think it will be a lot of fun.”