Champion team threatens to pull out of V8 SuperTourers

Champion team threatens to pull out of V8 SuperTourers 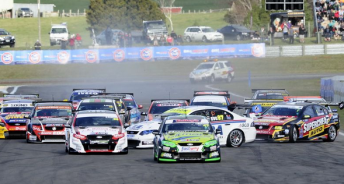 McLaughlin, whose team won the inaugural series last year with son Scott McLaughlin at the helm of the Commodore, is appalled at the driving standards shown in V8ST this year.

Incidents where young Scott has been on the receiving end continued at the final sprint round at Taupo recently.

McLaughlin snr has informed the car’s chief backer, Supercheap Auto, that he is contemplating pulling out of the three endurance races – the final events in the 2013 championship – and does not intend to return for 2014.

“I’ve spoken to Supercheap and said we are not really interested in going back,” McLaughlin told Speedcafe.

“I’m talking that we will pull out of the enduros and we won’t go back next year either.”

“I’ve ripped up $90k in damages alone this year from the four rounds. It takes away all the fun and it’s all the time and effort everyone has to put in.”

The Gold Coast-based Kiwi transport businessman has come to his wits end over the poor driving standards ever since the opening round at Hampton Downs in February this year.

“Scott was cleaned up in the first race at Hampton Downs and we’ve had plenty of dramas since,” McLaughlin snr said.

“Taupo was out of control. We broke two lap records in qualifying and get turned around in race two by someone who was just over zealous going into the first corner.

“Then we came to the final race and it was just carnage. It was push, push, push from behind and we get turned around and then turn Shane (van Gisbergen) around.

“In the meantime we get smashed around and get the right front taken out of our car.

“And then later in the racing if you have a look at the footage it’s just crazy driving. The guys have got no respect. It’s unprofessional.

“Definitely SuperTourers need to do something about it.”

“It’s at the stage where both Scott and I and the team don’t really want to go back.

“And we are not saying that as a threat, we are saying we may seriously pull out.

“I sincerely don’t think it’s worth going back.”

McLaughlin has signed a co-driver who the team has not officially announced owing to its uncertain future.

The team ran successfully with Jono Webb at the V8ST enduros last year. The same combination finished sixth in the Bathurst 1000, which was young McLaughlin’s debut in the Great Race.