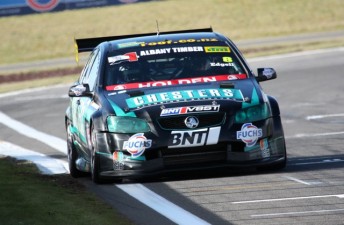 Holdsworth is the latest Australian driver to mix his V8 Supercar commitments with the New Zealand tin top series which is in its second year.

The Chesters car ran extremely competitively in the long distance races last year including finishing in third place at the hands of Edgell and international Kiwi Chris van der Drift at the Ruapuna circuit in Christchurch.

Holdsworth said: “Tim Edgell and I are about the same weight and height which is always a good thing in being comfortable in the car.”

“Ross Stone (Kiwi expat and Erebus Motorsport V8 general manager) is an old mate of Randell Edgell who runs the Chesters Team (and) was very complimentary about Randell’s car preparation and expertise.

“I also like the fact that all the drivers have equal equipment and its down to the team and the driver’s as to how they get the most out of what they have”.

Tim Edgell, 12th in standings after the four sprint rounds, goes into the three enduros with a heightened level of expectancy following the Holdsworth signing.

The opening endurance race is scheduled for Hampton Downs from September 28-29 conveniently placed between the Sandown 500 and Bathurst 1000 events.

While the second enduro is also listed for Hampton Downs from October 19-20, a week before the Gold Coast 600 with the final enduro set to be staged at Pukekohe from November 29-December 1.