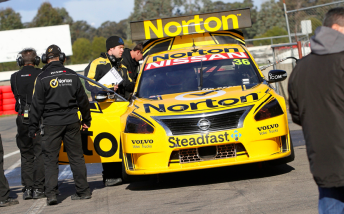 V8 Supercars will stipulate a minimum number of pitstops for each of the three Pirtek Enduro Cup races in its latest effort to appease new-for-2013 players Nissan and Mercedes.

The V8 Supercars Board voted through the compulsory pitstop initiative today following the outcry over the reduced ethanol blend fuel trialled in the Nissan and Mercedes cars at Winton.

All cars will run the regular 85 percent ethanol blend for the endurance events, despite V8 Supercars again underlining its findings that the fuel run at Winton provided no performance advantage.

This weekend’s Sandown 500 will require each car to make a minimum of four pitstops, while stop requirements for the Bathurst 1000 and the Gold Coast 600 are yet to be determined.

“The Commission believes this is the appropriate method to minimise the effect of the current fuel economy variance that exists ahead of these three critical endurance events,” said V8 Supercars’ motorsport manager Damien White in a statement.

“It was determined that while there was no material gain in power or performance using the lower blend of ethanol fuel, a more effective approach was to ensure everyone was racing on the same basis by mandating the number of pit stops.”

The poor fuel consumption of the four-valve engines in the four Nissan Motorsport and three Erebus Motorsport entries has been a talking point throughout their development to date.

Although the minimum stop regulation will give the new players a fighting chance, the need to take on more fuel across their four stops can still be expected to count against the four-valve cars.

The wide-open Sandown layout will also emphasise any horsepower deficiencies in the newer engines, with the Nissans expected to suffer more in a straight line than the Mercedes based on recent events.