Edwards wins at Richmond as Chase is set

Edwards wins at Richmond as Chase is set 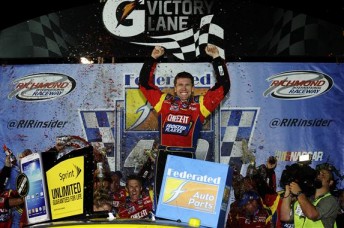 Carl Edwards has won the Federated Auto Parts 400 at Richmond and finished the NASCAR “Regular” season with the most points.

Edwards setting himself up for a tilt at the title.

“That seemed like a crazy idea about a month-and-a-half ago, but these guys have buckled down – everybody has rallied together.

“This championship would mean the world to me. The next 10 weeks, we’re gonna be on them hard. They’re gonna know we’re here.”

With 10 cars going into the fight for the Sprint Cup based on points, plus two for those with the most wins, made for an intriguing battle up and down the order.

In the end those two “Wildcard” spots went to Kasey Kahne, who despite being 14th in points got through on his two race wins over the opening 26 races, and Martin Truex Jr, who despite finishing on the same points and wins as Ryan Newman, got through on a count-back based on a second place finish he scored at Texas. The other driver to miss out albeit by just a single point was pole sitter and four-time champion Jeff Gordon. Also not in the running is defending Sprint Cup champion Brad Keselowski, who despite leading plenty of laps (142 of 400) was not in contention when it counted. 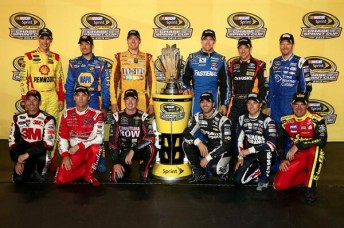 The 12 drivers in the Chase for the Sprint Cup

“Yeah, that is just the way our cars have been this year,” said Keselowski.

“They haven’t been good enough and we haven’t executed as well as we needed to.

“The thing about points is it is the best measuring stick in sports. You know who deserves to be where because the results speak for themselves. We didn’t have enough results to get where we needed to be.”

Newman can consider himself hard done by, having taken the lead with nine laps remaining and within sight of victory. Then two laps later Clint Bowyer spun and this brought out the final caution of the race. All the top teams pitted, Newman went in first and came out fifth. He climbed back to third at the end, but seventh place was enough for Truex Jr. to ruin his title hopes.

A long night for Australia’s Marcos Ambrose who finished 27th after a car that was bottoming throughout the race.

The final 10 races of the year keeps all cars in the races, but the top-12 are now separated from the rest of the field on points. Cars are re-seeded based on race wins, and that means Matt Kenseth will start the final 10 races in the points lead thanks to his five victories on the year.

Reseeded Points for the Top-12