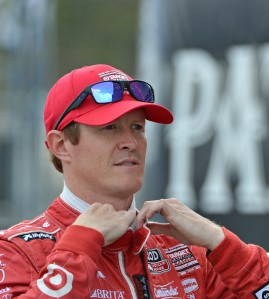 Kiwi driver Scott Dixon has copped a $30,000 fine and has been placed on probation after calling for IndyCar race director Beaux Barfield to be sacked.

The verbal attack came after Dixon was, for the second race running, involved in an incident with Will Power at the Baltimore race.

Dixon was found to breach rules 9.3.1.8 and 9.3.7 following the event where Power suddenly veered right causing the Kiwi to slam into the wall.

The Ganassi driver remains in contention to win his third IndyCar title with the Houston and Fontana races remaining.

A statement from IndyCar said: “Because of the public display of these actions, Dixon will be able to work off the fine by making a public appearances on behalf of INDYCAR.

“The member may contest the imposition of the penalty pursuant to the procedures and timelines detailed in the protest and appeal procedures of the IZOD IndyCar Series rulebook.”

It remains unclear whether Dixon will appeal the penalties.