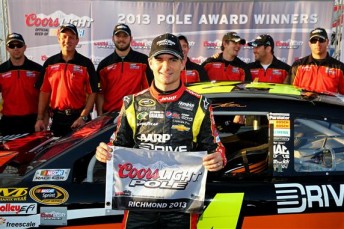 Jeff Gordon has given himself a leg-up in his fight for the NASCAR Sprint Cup title with pole for the Federated Auto Parts 400 at Richmond.

It is Gordon’s first Coors Light Pole Award of the year, but is his 73rd of his career and sixth at the 0.75-mile short track. It extends his streak to 21 straight seasons with at least one pole position in NASCAR’s top series, an all-time record. NASCAR Hall of Famer David Pearson earned at least one pole in 20 consecutive seasons.

Gordon sits 11th in the standings and with the top-10 in points, plus two wildcards for the drivers that have the most wins, the four-time series champion is sitting on the bubble.

Gordon’s lap established a qualifying record of 210.179 km/h (130.599 mph). It stands as the 14th track record broken this season since the advent of the sixth-generation (Gen-6) car used in NASCAR’s premier series.

Australia’s Marcos Ambrose will start deep in the field in 32nd.

“Obviously not where we wanted to be starting the race for tomorrow night, but our team works really hard week in and week out and I’m confident we can turn it into a good finish tomorrow,” said Ambrose.

“It’s going to be hard to move through the field before the leader catches up to the last car, so we’ll need to come out hard right away.

“We’ve been able to overcome a lot these past couple of weeks for top-10 finishes, and I know our team can get some top-fives here at the end of the season.”

Only Mike Bliss failed to qualify for the 43-car field.