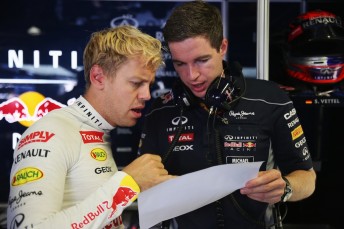 Sebastian Vettel storms to top at end of Friday practice

Sebastian Vettel led Red Bull to a one-two at the end of Friday practice for the Italian Grand Prix at Monza as the powerhouse team look set to again dominate.

The Lotus team which is experimenting with a longer wheelbase at the super fast circuit, cracked the third and fourth fastest times with Kimi Raikkonen and Romain Grosjean both posting an identical time of 1:25.116s.

Fernando Alonso was fifth fastest ahead of the Mercedes of Lewis Hamilton and Nico Rosberg.

Red Bull later switched tact with their drivers when Webber moved to the medium compound with Vettel on the option while Ferrari did the same with Alonso and Massa.

Lotus showed tremendous short-run pace after adjusting the rear suspension and tweaking the front wing on Raikkonen’s machine midway through the 90-minute run.

There was a scare for Raikkonen who ran wide on the exit to the Parabolica, kicking up a cloud of dust in a careless moment however he managed to gather up the car.

But at the front it was shades of the Belgium Grand Prix of two weeks ago with Red Bull stamping their authority early.

See below for practice 2 results

See below for practice 1 results