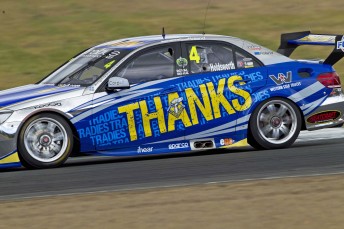 The IRWIN Racing Mercedes will carry special one-off livery for the Wilson Security Sandown 500 as Erebus Motorsport attempts to emerge as a surprise endurance weapon.

The #4 E63 AMG Mercedes-Benz will pay respect to Australia’s tradespeople ahead of the National Tradesmen Day with warpaint offering gratitude to tradies.

It is understood the other two Erebus runners – #47 Heavy Haulage Australia Racing of Tim Slade/Andrew Thompson and the #9 SP Tools Racing entry for Maro Engel and Steve Johnson will also undergo livery revisions.

Holdsworth, who shares his E63 with classy Porsche and GT driver Craig Baird, is optimistic the squad can overcome the difficulties of its previous start at Winton.

“It’s been pretty tough recently and hopefully we’ll get on top of it and have a really strong car there (Sandown),” Holdsworth told Speedcafe.com

“I’m looking forward to teaming up with Bairdo. We always seem to have a bit of fun together. We drove together last year and we work really well together.”

Holdsworth completed a routine Sandown test at Queensland Raceway during the week where he was joined by Baird who was fresh from his epic win behind the wheel of the Clearwater Racing Ferrari 458 Italia in the Sepang 12 Hour.

“I  feeling I’m driving as well as I ever have and its all about nailing the set-up now,” Holdsworth added.

“Sandown being 500km, if we don’t qualify well, which we haven’t the last couple of rounds then it’s a long race to get back positions and try to work our way towards the front.

“Hopefully we won’t have to worry about that. Hopefully we’ll have a strong car from rolling it out of the truck on the Friday and we can progress forward from there.”

Baird says the gruelling schedule of the Sepang endurance race last week in crippling humidity is a decent fitness check for Sandown, the opening leg of the Pirtek Enduro Cup, with also comprises the Bathurst and Gold Coast races.

“It’s a good way to start the endurance campaign off coming back from Sepang with a win in the 12 Hour,” Baird said.

“It’s also good for your race fitness to try and get a race in like that.”