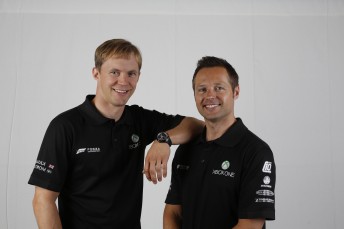 International guns Andy Priaulx and Mattias Ekstrom will spearhead Triple Eight’s Bathurst wildcard entry with details of the Xbox-backed Holden to be officially unveiled this morning.

Priaulx and Ekstrom will pilot the #10 car that will carry the Microsoft Xbox One/Forza 5 livery ahead of the highly anticipated launch of Microsoft’s latest console and flagship motorsport game.

The identity of the wildcard drivers had been kept a closely guarded secret since Holden Motorsport confirmed the Brisbane squad would field a third entry for the Supercheap Auto Bathurst 1000 from October 10-13 in late July.

While the third car has stretched the powerhouse squad’s resources with its late confirmation, the team is expected to assign technical director Ludo Lacroix as the #10 car’s engineer.

Lacroix has been a key figure throughout much of Triple Eight’s V8 Supercar history which began in late 2003 however the Frenchman has not directly engineered a car since overseeing Jamie Whincup’s maiden year with the squad in 2006.

Priaulx is already au fait with the Brisbane outfit and is highly regarded by team boss Roland Dane.

A three times World Touring Car Champion, the 40-year-old was part of the co-driver line-up with Triple Eight for the Surfers Paradise International races in 2010 and 2011.

Although Priaulx’s name had been linked to the ambitious wildcard entry, Ekstrom’s inclusion has come as a surprise. The 35-year-old Swede will be making his V8 Supercar debut.

The three-times Race of Champions victor and twice DTM champion arrives with lofty qualifications, forging a reputation as one of the most lethal and versatile racers in world motorsport.

Ekstrom’s only previous link with the squad was a test with Triple Eight’s UK operation when he tried out a Vectra at the Pembrey circuit at Wales way back in 1998.

Stay tuned with Speedcafe.com for more details on this breaking story.