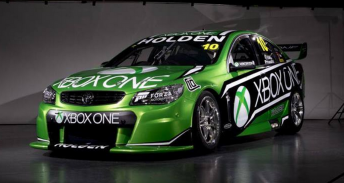 Triple Eight boss Roland Dane has tipped the Xbox One Racing wildcard entry to be the darkhorse of the Supercheap Auto Bathurst 1000 in October.

Details of the ambition third-car assault by Triple Eight have been uncovered with top internationals Andy Priaulx and Mattias Ekstrom to take charge of the #10 entry.

Ekstrom is a Race of Champions legend and double DTM champion however he has never raced a V8 Supercar before nor been to Mount Panorama.

Priaulx has Bathurst experience and was part of Triple Eight’s squad for the international co-driver races on the Gold Coast in 2010 and 2011.

“We reckon that this Xbox One entry is going to be a bit of a darkhorse come raceday. Both Andy and Mattias are two of the greatest touring car drivers in the world,” Dane said.

Mark Skaife, a longtime face of Xbox in Australia, has been enlisted as the Xbox One Racing team mentor.

Skaife will play a vital role in schooling Ekstrom for his maiden outing at Bathurst with the #10 entry to be engineered by Triple Eight technical director Ludo Lacroix.

“To be a wildcard entry in the Bathurst 1000 is a very unique chance for me,” Ekstrom said of the bold mission.

Priaulx remains excited about the wildcard bid despite facing limited preparation for one of the world’s toughest touring car challenges.

“With the experience of Mark Skaife and Triple Eight Racing who between them have won the Bathurst 1000 11 times I think there is no better opportunity for us to go and have a great race,” Priaulx said.

The commercial arrangement centres around the highly anticipated Forza Motorsport 5 which is set to launch with the new Xbox One console on November 22.

Alan Bowman, Microsoft regional vice president for the Asian region, said the 29th car for the Bathurst 1000 is a chance to showcase a ‘truly international and competitive racing team.’

“This is unprecedented in Australia. After months of working in secret to create a piece of racing and gaming history, we are excited to finally reveal the wildcard entrant,” Bowman said.

“Xbox has had a strong association with the sport of V8 Supercars over the last decade and for years Australians have been asking us to include the Bathurst track into the Forza Motorsport game.”