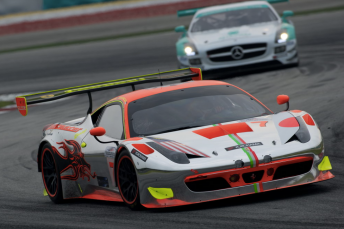 Craig Baird on his way to winning the Sepang 12 Hour

In doing so the versatile and talented Baird drew the attention of several movers and shakers in the GT world who attended the race from Asia and Europe.

The Sepang success may open some doors for Baird to race in the Blancpain Endurance Series next year as well as Le Mans.

Fresh from the triumph Baird flew back home for the final V8 Supercars pre-Sandown 500 test day at Queensland Raceway where he is sharing the IRWIN Tools Mercedes with Lee Holdsworth.

Speedcafe.com editor-in-chief Gordon Lomas caught up with Baird to discuss the Malaysian triumph and what the future holds.

SPEEDCAFE: It was a decent race to finally win. You started from fifth so tell us how it unfolded.

CRAIG BAIRD: I’d been on the podium a couple of times there and hadn’t won it. Weng, the car owner, won it a few years ago. Obviously the race gets harder when you get the European guys out there.

We felt we really played it right by the rulebook which meant you had to run two amateur drivers and one so called pro (Baird) so that knocked us around in qualifying because the grid was determined on our aggregate times.

The start of the race was a rolling start so I wasn’t really going to gain anything and then (Mika) Salo was holding us up a little bit in the AF Corse Ferrari and then we got past him and closed the gap to the (Bernd) Schneider Mercedes. I thought it was going to be harder to pass than it was because it had a bit of an advantage in a straight line but our car had an advantage aero wise and under brakes.

There were strengths and weaknesses in both cars. Then I got past him and there was quite a gap to Thomas Jager in the other Petronas Mercedes. Then we got past him and we created quite a good gap but the Aston of Richard Lyons had pulled a 15s lead by that point. That car was fast and in another class.

But in the first round of stops they had a bad stop and we had a good one and then we held on and off with the AF Corse for the next nine hours.

We were about 30s ahead of the AF Corse Ferrari and they had a slight issue where they opted to change some electronics on their car so that’s why the gap ended up being so big. They elected to play it safe to try and get back to a podium position as opposed to carrying on with a gremlin in the car.

SPEEDCAFE: It was a midnight start which I guess was to try and combat the oppressively hot and humid conditions.

BAIRD: It’s better because the temperature is down a bit compared to during the day but it was still hot and humid. Speaking to all the engineers in the teams I think all the drivers were absolutely knackered when they got out. It was very draining. I lost nearly five kilograms by the end of the race. I thought I was drinking a lot but I just couldn’t drink enough to stay hydrated. 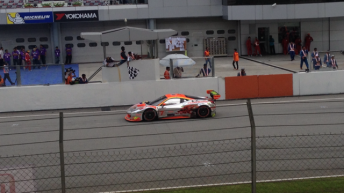 SPEEDCAFE: Given the tough conditions how did your co-drivers fare?

BAIRD: It was the first endurance race for Hiroshi (Hamaguchi) the Japanese driver but after his first stint he said ‘I’m dead, I’m dead’. So had just went and sat in an inflatable swimming pool and we were a little bit concerned at that point that he might not be able to get back into the car. But I said to him that the first one is always the hardest. It’s like Bathurst and then you go and do a double stint and its not so bad because somehow your body acclimatises. It was a tough race. I spoke to Richard Lyons’ engineer and he said Richard didn’t even want to get back in the car.

SPEEDCAFE: You’ve won a hell of a lot of races and you have a Bathurst 12 Hour win in 2007 but for all your success you are not really know as an endurance driver would you agree?

BAIRD: I really don’t know what I’m known for. I’ve had a win in the Bathurst 12 Hour and a few podiums. Then we won the Super Touring Bathurst 1000 in 1997 but had the race taken from us (after a post-race technicality). But GT wise I feel my style really suits because I did so much single-seater racing when I was younger.

SPEEDCAFE: The field had plenty of depth with some aces from Europe and some decent Asian talent. You must have turned some heads. Were there any nibbles from GT talent scouts?

BAIRD: I’ve had a few approaches not only from Japan but from Europe. So now I have to work away and get my Blancpain seeding. I think I’d only be seeded as silver because the only things I’ve ever really won is national-based championships and not international championships.

So hopefully there is a bit of a career path for silver drivers because they are hard to find. A lot of silver drivers don’t have the experience. If they want to drive with Platinum and Gold they have to grab silver and bronze style drivers.

So this is looking at Blancpain for next year and the same for Asian GT and Japanese GT. It’s always easy straight after the race when people are bubbly and happy and want to know about you.

I had a few people speak to me after the race and people who want to utilise me in Asian, Japan and some stuff in Europe.

It would be nice if something comes out of it.

I think we proved at Bathurst (finished second) earlier this year, in a GT (Clearwater Racing Ferrari) car we are as quick as anyone in the 12 Hour and the same at Sepang.

The good thing about those races is there are a lot of factory guys watching and they have got plenty of time to absorb it.

I think we showed a lot of people up in Malaysia because I’m 43 but still relatively fit and fitter than most of the guys I was racing against.

SPEEDCAFE: There was no time to rest after Sepang and you had to re-adjust and prepare for your co-driving duties in the #4 Erebus Motorsport Mercedes V8 Supercar. That must require completely different thought processes and styles.

BAIRD: For me it is a little bit of a venture into the unknown with the new car and new team. Obviously there’s a lot of chat and things I don’t understand with fuel economy and style issues and what happens with that.

The Nissan and the Mercedes are at a definite disadvantage as far as fuel economy goes. But I just have to do my job and let the people behind the scenes worry about the sort of thing. I don’t think the car’s are a mile away. Every time I’ve driven the car I’ve been reasonably happy with it.

Going into the enduros I don’t have any expectation or that we are crying for a podium. I think the first thing for a new team and a new car is to finish an enduro and anything from there is a bonus.