Sykes and Davies take Superbike wins at the Ring

Sykes and Davies take Superbike wins at the Ring 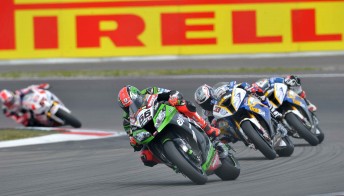 Tom Sykes took the opening race at the Nurburgring

Baz, following the crash he had during the morning’s warm-up, was diagnosed with a fractured C2 vertebra, fortunately with no neurological issues. Baz will remain under observation at Adenau’s Krakenhaus Maria hospital that is located near the track, while waiting to be transferred and for the medical checks that will define the plans for recovery.

Rea sustained a fractured left femur and he will undergo surgery at the military hospital at Koblenz, in which he should stay for the next two or three days.

Good news for Camier, after being immediately assessed at trackside by the medical staff he was then flown by Air Ambulance to Stiffungs Klinicum in Koblenz. Camier was observed and scanned for potential neck injuries, but the scans proved negative and he was given the all-clear despite the massive impact. He is expected to leave hospital and will assess his condition in the coming days to decide on his availability to return to the track.

Sykes was out front in the opening race when the red flag was waved on the 18th lap as a result of the two crashes that involved Rea and Camier, who both lost control of their bikes at Turn 9 on the oil left on track by Federico Sandi’s Team Pedercini ZX-10R broken engine.

Once the flag came out, Marco Melandri (BMW Motorrad GoldBet) was on the lead after a passing Sykes at the first turn but, as the final results were based on the previous lap, Sykes was awarded the victory, with Melandri’s team mate Chaz Davies to complete the podium. The three riders, along with Rea, rode together up front, but it was Sykes who led almost the entire race, after overtaking Melandri at the second turn during the opening lap.

“It is very difficult to tell if I could have come back at Marco in the last two laps of race but the decision to stop the race has gone in our favour for a change,” said Sykes.

“I was expecting probably a few more points in race two but it is racing and things like this happen. It seems that we had some limitations in that race, which is a shame because over race distance I was 100% confident in myself.

“It was important to keep Sylvain Guintoli behind me in that second race as we saw how every point counts last year.”

Tom Sykes speaks after the race 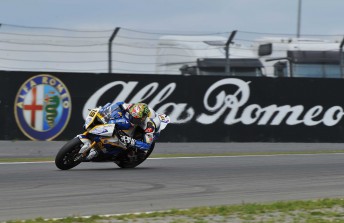 Davies got back on the top step of the podium after winning the second race of the day, that was red-flagged on the nineteenth lap after One Event rider Matej Smrz (Yamaha Motor Deutschland) suffered a high-side and landed on track next to his YZF-R1, laying some oil on the tarmac.

The Welshman successfully defended the lead in the final laps in a three-way battle with second place Eugene Laverty (Aprilia Racing Team) and team mate Melandri. Davies was able to repeat exactly the same results scored last year in the two races, and achieved a long-awaited win after the double at Aragon earlier in 2013.

Despite the absence of three top riders due to injuries (Baz, Camier and Rea), Race 2 was characterised by a fierce battle up front for the win. Sykes and Sylvain Guintoli (Aprilia Racing Team) finished fourth and fifth respectively, after being very close to the front for most of the 18 laps completed. The two riders could not manage to get in the mix for the top-3, as well as sixth place Davide Giugliano (Althea Racing Team Aprilia), who lost a lot of ground in the closing stages.

“I am obviously super happy with the victory in race two,” said Davies.

“I was already happy with my podium in race one but I knew we could improve and so we did. We were just slightly struggling in a couple of areas but we worked on that for the second race.

“The last couple of laps I just put my head down seeing if I could just get away. In the end the red flag came and I was in right place at the right time. A big Thank you to my team as they did a great job this weekend and we got a double podium again.”

Sykes and Guintoli are still separated by one point, but the factory Kawasaki rider is now the new leader in the standings, at the end of the tenth round of the season.