Molly Taylor out of Rally Australia

Molly Taylor out of Rally Australia 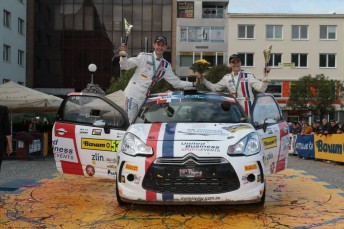 Taylor and co-driver Seb Marshall celebrate in the Czech Republic

A victim of her own success has forced Australia’s fast femme Molly Taylor to pull out of Coates Hire Rally Australia so that she can compete in Poland on the same weekend.

Taylor, who drives a Citroen DS3 R3T for the United Business Team in the European Rally Championship, had previously been announced as an entry for Innate Motorsport at the 13-15 September event aboard a Ford Fiesta R2. However, she is leading the inaugural Women’s Trophy in the ERC and her team has decided to make that a priority. Adding to the frustration is that the date for Poland event was changed a few months back after it was initially not a clash weekend.

“I was really looking forward to my home event because WRC Rally Australia was something I really wanted to do,” said Taylor.

“But in terms of our focus on the ERC it’s the smart move to do Poland. We really need to push on now and start to increase our pace. Poland is a smooth gravel rally and obviously an ideal opportunity to do that and I didn’t want to lose out. It will be our first time there, we’ll have to take that in our stride but we’re looking to get out there and show our competitiveness.”

Taylor extended her lead in the ERC Ladies’ Trophy on Rally Zlin (Czech Republic) over the weekend.

Although disappointed not to have Taylor as part of the Innate Rally Team at Coates Hire Rally Australia, team driver Adrian Coppin understands the decision.

“Molly called last night to let me know that she had been offered an opportunity to add Rally Poland to her ERC campaign to support her pursuit of the ERC Ladies’ Trophy and that she would be taking the chance, “said Coppin.

“I am disappointed, as I was looking forward to the competing with her again but I fully understand her decision.

“Nevertheless our preparations are going well and we’ll be ready for Rally Australia and a tilt at the WRC 3 win.”