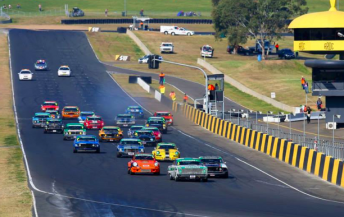 Bill Pye and Andrew Miedecke ensured that three different drivers shared the race victories at the fifth round of the Touring Car Masters in Sydney.

Pye made the most of the morning’s reverse top 50 percent grid encounter, showing the way from the third lap.

The Porsche driver’s maiden win in the class didn’t come without a late challenge from Race 1 winner John Bowe, who momentarily changed places with Pye on the penultimate lap.

Les Walmsley took third in his Monaro, albeit almost 15 seconds adrift of the winner, while the Ford Falcons of Jim Richards, Keith Kassulke and Eddie Abelnica completed the top six.

Jim Richards had taken the flag fourth in a three-wide battle for second but was demoted to fifth, behind the Mustang of Cameron Tilley, thanks to a post-race time penalty.

The victory was a strong recovery for Miedecke after the Camaro had suffered an alternator failure in Race 2.

Miedecke is now exactly 150 points adrift of Bowe in the series standings, with second placed Richards also a substantial 119 shy of the Mustang. 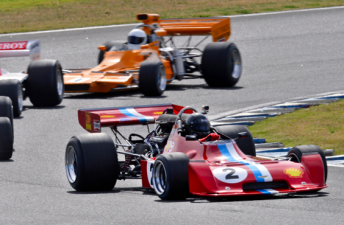 Tom Tweedie was too fast in the F5000 Cup

The Muscle Car Masters event also featured the opening round of the Formula 5000 Australia Cup, where 25-year-old Tom Tweedie proved too good in all three races.

The Lola T332 of 71-year-old Kiwi Ken Smith was the Chevron B24/28-mounted Tweedie’s biggest adversary in the afternoon’s Trophy race, but was more than six seconds adrift at the end of the 10 laps.

Bryan Sala (Matich) completed the podium place-getters in a field that had been depleted to just seven starters.

The most notable absentee had been Kiwi Clark Proctor, whose March 73A suffered an engine failure during the morning’s race.

The five-round series will continue as a support to the V8 Supercars Championship’s Sandown 500 in two weeks time.

In other MCM racing action, David Wall completed a clean sweep of four Group Nc over 3500 encounters, taking out the three heats as well as the Trophy race in the ex-Ian Geoghegan Ford Mustang.

The Greens Tuf Ford Mustang of TCM driver Bill Pye added the Race 2 win to his Saturday success in the Heritage Touring Cars, but could only manage third behind Terry Lawlor (Caltex Ford Sierra) and Rod Markland (Nissan Skyline GT-R) in the Group A & C Trophy.

Rusty French similarly won each of the three Group S heats across the weekend in his De Tomaso but was third in the Trophy race, which was taken out by the Datsun 260Z of James Flett.

Brent Trengrove’s Mustang proved the pick of the 42 car field in the Group Nb Trophy, while the Nc under 3500 was won by Andrew Williams’ LJ Torana.

A field of 16 EH Holdens had earlier taken the start of a special 50th anniversary event for the classic model, with Ben Wilkinson taking the honours from a brief three-lap race.