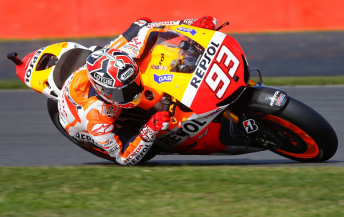 Marc Marquez continued his sensational run in the MotoGP World Championship by scoring pole position for the British Grand Prix.

The Spaniard waged a tight battle with countryman Jorge Lorenzo during the closing stages of qualifying at the Silverstone circuit, eventually emerging 0.13s faster.

Local hope Cal Crutchlow bounced back from a pair of morning practice crashes to secure the outside front-row spot.

The factory Ducatis of Andrea Dovizioso and Nicky Hayden sandwich Alvaro Bautista’s Gresini Honda on the third row, while the second of the Britons, Bradley Smith, completes the top 10.