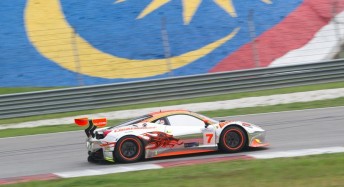 Along with Mok Weng Sun and Hiroshi Hamaguchi in a Ferrari 458 Italia GT3, the trio completed 323 laps of the Sepang Grand Prix Circuit in the race that went from 12am to 12pm.

It was a strong comeback for the team which last year failed to finish due to mechanical failure.

The chrome coloured Ferrari laid down the gauntlet early, taking the lead prior to the halfway mark.

Once the challenge of the likes of the Mercedes SLS AMG GT3 entries and defending champions Petronas Syntium Racing hit strife the pressure was eased.

“We were happy to go into the race from fifth in qualifying and we just focused on consistency and slowly made our way up,” said Baird.

“Everyone will have their own war story about racing, but today, as a team, we’re just extremely happy with this win.”

Australians Roger Lago and David Russell, along with Peter Kox claimed second in a Lamborghini LP560-4.

Both Ferraris were also challenged by the Porsche GT3R of LKM Racing (Darryl O’Young, Vuthikorn Intharaphuvasak and Siu Yuk Lung) but team fell off the pace in the final hour of the race.

In the end though, it was AF Corse who managed to pip Naza Nexus Racing for the final spot with 15 minutes of the race remaining.