Erebus weighing up fourth car for 2014

Erebus weighing up fourth car for 2014 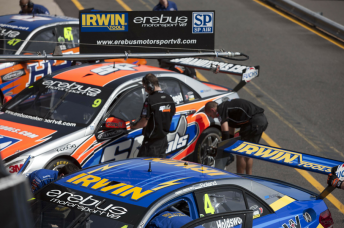 Erebus is evaluating a fourth car for 2014

Erebus Motorsport is currently assessing the possibility of adding a fourth Mercedes-Benz to its V8 Supercars Championship stable next season.

The team’s current three-car model stems from its former guise as Stone Brothers Racing, which ran its own two entries in addition to the in-house customer car for #47 Racing Entitlements Contract holder James Rosenberg.

Adding a fourth car to the line-up would enable the team to avoid the various compromises of campaigning an odd number, which includes the need to share a pit boom and crew with a rival team.

“There are still opportunities up and down pitlane for that to occur and there are economies of scale advantages (in running four).

“We run two trucks already (each with the capacity to transport two cars). It’s something we’re considering closely.”

The future of more than half a dozen Racing Entitlements Contracts remains up in the air for next year, ensuring Erebus plenty of scope for negotiations.

Although its property tycoon owner Betty Klimenko has spent an unprecedented amount of money on the championship in the last 12 months, Maddison stresses that the “numbers must stack up” in order for the team to be expanded.

“It’s obviously part of my role to evaluate the numbers and I’d need to put the business case forward to our team owner and she’d need to be comfortable with it,” he said.

“I’d need to make the numbers stack up first.

“I’d say the timeline on that, to know exactly how our landscape looks for next year, would be six to eight weeks,” he added.

“By the doorstep of Bathurst we should know exactly where we’re at.”

Maddison confirmed that negotiations with Rosenberg and his long-time driver Tim Slade about staying on for a fourth season next year are ongoing.

Slade is currently the highest placed Erebus driver in the points standings in 20th, with team-mates Lee Holdsworth and Maro Engel 27th and 28th respectively.