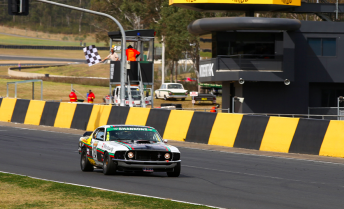 John Bowe takes the flag to extend his points lead

John Bowe has extended his lead in the Touring Car Masters points standings by taking out the opening race of the Muscle Car Masters weekend at Sydney Motorsport Park.

Richards was eventually classified third, however, after being handed a five-second time penalty for a false start.

That elevated Andrew Miedecke to second, enabling the Camaro driver to draw within one point of Richards for second in the standings.

Bowe meanwhile is romping towards a third straight TCM title, with his lead out to almost 100 points.

“I’ll take the wins where I can,” said Bowe, before turning his attention to the reverse top 50 percent grid Race 2.

“I’ll stick to the usual plan to do my best and I doubt it’s going to be easy as it’s hard to pass here and there’s many great competitors who’ll be ahead of me.

Adam Bressington’s Monaro ran in the top 10 during the opening laps before breaking a conrod.

Bill Pye (Greens Tuf Ford Mustang) had proven the class of the combined Heritage Touring Cars C & A race earlier in the day.

Another full day of action will complete the Muscle Car Masters event on Sunday.