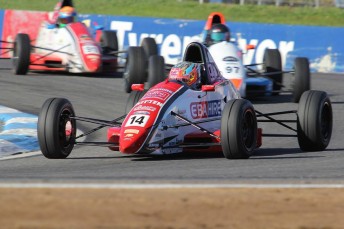 Formal discussions between the Shannons Nationals and the Formula Ford Association are set to begin next week as plans for a new national series are devised.

The FFA, which is the representative body for Formula Ford in Australia, has vowed to step into the breach left by CAMS’ decision to discontinue the Australian Formula Ford Championship beyond the end of the season.

Currently administrators of the various state-level competitions, the FFA had run the national competition prior to the formation of the Formula Ford Management business, led by category stalwart Margaret Hardy, for 2006.

The FFA is now putting the wheels in motion to run a CAMS sanctioned national series in 2014, most likely run to a reduced five or six round schedule focussed on the eastern states.

An association spokesman confirmed to Speedcafe.com that the FFA is not interested in continuing on the V8 Supercars support bill, while the Shannons Nationals is one of multiple options that it will assess in coming weeks.

The AFFC ran two rounds of its 2011 season with the Shannons Nationals, but has otherwise opted for the large audiences and commercial television package available through supporting the V8 Supercars.

Shannons Nationals director Rob Curkpatrick is hopeful that a deal with the FFA can be reached.

“One of the reasons we exist is to facilitate national level motorsport so it makes sense that we will be talking to them,” Curkpatrick told Speedcafe.com.

“We will need to know within the next three or four weeks where we’re heading though because we’re pretty well advanced on our program of who is running where next year.”

The FFA has made it clear that it is aiming to re-establish national Formula Ford as a low-cost proving ground.

A combination of reduced entry fees and travel costs associated with moving away from the V8 Supercars, as well as the potential to further standardise components, are said to be able to substantially reign in budgets.

Current spending at the top of the AFFC is reportedly in the $250,000 per season bracket.

The FFA hopes to foster a return to the family team structure witnessed prior to the proliferation of multi-car ‘super teams’ in the 2000s, with budgets of $80,000 thought to be an achievable goal.

CAMS, meanwhile, is expected to closely assess the suitability of the FIA’s new wings-and-slicks Formula 4 class as part of a wide-ranging analysis of how best to foster young talent in future.

Read more about CAMS’ movements and the initial news of the FFA’s plans in Speedcafe.com’s earlier story