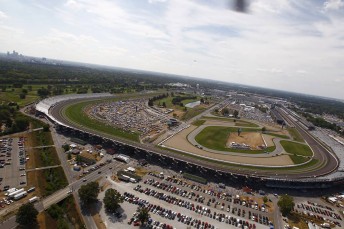 An IndyCar will turn laps of the Indianapolis Motor Speedway’s road course next week ahead of a potential race at the venue in future.

The speedway is poised to invest almost $100 million as part of a long-term plan to make the road course more attractive to series such as IndyCar.

Graham Rahal will undertake the test in his Rahal Letterman Lanigan Racing Dallara.

The only time to date that an IndyCar has run on the road course occurred during the development of the all-new 2012 chassis, for which the late Dan Wheldon was at the controls.

“We are looking forward to seeing an IndyCar run on the IMS road course and using the information to help refine the investment we are planning to make to the track portion of our overall facility planning,” said J. Douglas Boles, Indianapolis Motor Speedway’s president.

“As we look to the future of the Indianapolis Motor Speedway, the goal is to make changes to the road course that provide the most flexibility for its potential use and create a layout that is entertaining for our fans and enjoyable for our drivers – whether it is for IndyCar testing or racing, sports cars, MotoGP or other uses.”

IndyCar’s president of competition, Derrick Walker, emphasised the potential benefits of having the venue available as a testing facility.

“It is important to look at all possibilities that we have in the existing layout to gain as much information as we can about how the car will perform and what changes we can offer to make it more competitive,” he said.

“In addition to considering a potential race on the IMS road course at some point in the future, one of the advantages of maximising the current road course layout could be a future testing opportunity for IndyCar teams, especially since so many are based in Indianapolis.”