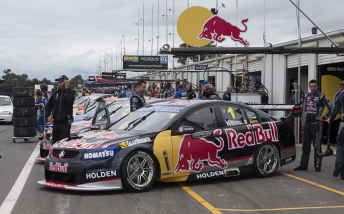 Jamie Whincup believes that only Red Bull Racing Australia’s long-term form will reveal whether the champion squad has been upset by the sudden departure of Adrian Burgess earlier this month.

The team endured one of its worst performances in recent memory at the weekend’s Winton event, which was the first meeting contested since Burgess’ move to the Holden Racing Team for 2014 was announced.

Whincup suffered a driveline failure while leading Saturday’s Race 25 of the championship, marking the first time that he has failed to finish a race due to a mechanical issue since May, 2010.

Inexplicably, Whincup’s car carried a driveline vibration into Sunday morning’s two qualifying sessions, which ensured that he started in the bottom half of the field for both races.

Despite the dismal showing, Whincup believes that losing Burgess, who has been replaced in the role by team owner Roland Dane, had nothing to do with the results.

“Red Bull Racing is 50 people deep and no one is that important that they can change the results of a weekend like that,” he told Speedcafe.com.

“Maybe they can change the long term, but certainly not the short term.

“That includes myself, Dutto (race engineer Mark Dutton), the other engineers… maybe even Roland. He could disappear for a weekend and not much would really change, because it is so deep with people who have been here for a long time.

“It would be unfair to link how poorly we performed at Winton with missing Adrian. It’s way too soon.”

Underlining Whincup’s comments, the #1 Holden’s inconsistent qualifying form at Winton had merely been a carry-over from recent events.

Having set a remarkable class leading qualifying average of 2.1 across the opening 17 races, Whincup’s average from the most recent 10 qualifying sessions sits at 9.2.

“We’re bouncing all over the place with balance,” admits Whincup, who had enjoyed what was expected to be an advantage in testing Lucas Dumbrell Motorsport’s customer Triple Eight chassis at Winton in the lead-up to the race event.

“These cars (the 2013 specification) are very difficult to set up and there’s no consistent top five runner at the moment.

“We’re extremely lucky that FPR let us off the hook in the last race at Winton with where they (Mark Winterbottom) qualified.

“Without doubt I’ve got the best crew and we’ve done a better job than anyone else so far, but we’ve made some errors, and we shouldn’t be leading.”

Despite the recent dramas, Whincup holds a 55 point lead in the championship over closest pursuer Will Davison, with Winterbottom a further 15 adrift in third.

Whincup will again team with Paul Dumbrell for the endurance events this year. The long-time friends won the Bathurst 1000 at their first attempt as a pairing in 2012.