National Karting Championships up for grabs this weekend

National Karting Championships up for grabs this weekend 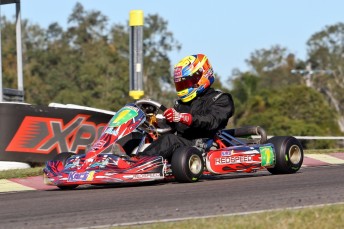 Pierce Lehane is one of the favourites for the Rotax Light national crown this weekend. pic: Bill Bryant, Fletcher Photography

A string of Australia’s best karters will have healthy International competition this weekend at the 2013 Rotax National Karting Championships at Victoria’s Puckapunyal facility showcasing six categories across two days of racing.

The 2013 Rotax National Championships will also be the setting for the announcement of the 2013 Australian team to contest the Rotax Max Challenge Grand Finals in New Orleans in America; an event in which Australia has featured as one of the best performing countries for the last 3 years. Many of the 12 seats available will come down to the wire and won’t be decided until the National Championship race on Sunday.

Not only will the nation’s best make their mark to head to America, some of the World’s best drivers will take it up to our home grown heroes. Dutchman Joey Hanssen, who has called Australia home this year, will be amongst the headline drivers in the Rotax Light field. Hanssen is currently leading the Pro Gearbox category in the Castrol EDGE CIK Stars of Karting Championships and is odds on to take the crown in late September in Melbourne.

He will face stiff competition from multiple National Champion, Pierce Lehane. The team Redspeed driver is an expert in the category and has been racing in the European Championships this year.

A field of 175 entries will take to the Puckapunyal track over the six categories, two of which will be oversubscribed. DD2 and DD2 Masters will both consist of 21 entries each, Rotax Heavy with 22, the Sodi Junior Max Trophy Class with 15 including two New Zealand debutants, Rotax Light is oversubscribed with 45 and Junior Max at a bumper 51 entries, totalling 66 across the two junior categories.

Qualifying and heat races will take place across Saturday with the deciding final races on Sunday over 20 laps on the 1km track. Entry is free to spectators.