Joseph Mawson to use Courtney’s wins as inspiration

Joseph Mawson to use Courtney’s wins as inspiration 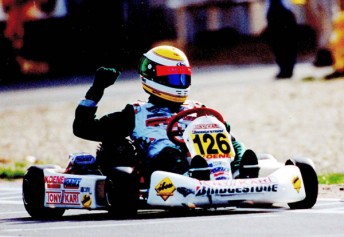 Australian Joseph Mawson says that he will be using the achievements of James Courtney during his karting career as inspiration when he lines up on the grid in the opening round of the World Karting Championship in England this weekend.

Mawson, who recently announced he would join the Kosmic Factory team for his world title tilt, believes that seeing a photo of Courtney after he won the 1997 crown in the team’s workshop reminded him that anything is possible when you make the most of your opportunities.

“It was a pretty surreal feeling to see a photo of James holding the Aussie flag on the podium in 1997 inside the team’s factory when I was there for the first time the other week,” said Mawson.

“Seeing that photo made me realise that even as an Australian on the other side of the world if you have the right opportunity, and you make the most of it, anything is possible.” 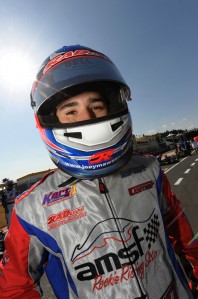 Joseph Mawson will line up in the opening round of the 2013 CIK-FIA World Karting Championship in England this weekend
(Pic: KSP)

Last November, Mawson became the first Australian to enjoy success at a CIK-FIA World Championship level since Courtney when he was victorious at the final round of the three-event World Under 18 Karting Championship in Bahrain.

Upon moving to Italy at the start of 2013 Mawson struggled with the fledging Top Kart outfit, however courtesy of the ongoing support of the Australian Motor Sport Foundation and his family along with a number of key players in the Australian karting industry, he now has a realistic shot at being crowned World Champion with his new team.

“Since joining the Kosmic team it’s the most confident I’ve been since I came to Europe at the start of the year. We had a test day last week where a lot of drivers were there and all of the Kosmic drivers were very close and showed some good speed, which is encouraging for the weekend ahead,” said Mawson.

“I’ve had a huge amount of support from people in Australia, especially after it was announced that I was joining the Kosmic team for the World Championship.

“There’s numerous people in Australia who played a significant part to make this opportunity happen for me and I’d really like to thank everyone involved. I hope that I can repay them for their faith in me with a strong result this weekend on karting’s biggest stage in the world.”

A total of 55 competitors will line up on the grid for this weekend’s opening round of the two-event CIK-FIA World Karting Championship representing 20 countries and five continents.

Practice begins this afternoon (Wednesday) and will continue tomorrow ahead of qualifying on Friday afternoon local time. Heat races will be contested on Saturday ahead of Sunday’s pre-final, where the top 17 finishers transfer into the final.