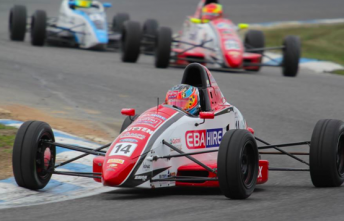 The Confederation of Australian Motor Sport will entrust Cameron McConville with devising a plan for the future of Australians in open-wheel racing following the announcement that the national Formula Ford championship is set to fold.

CAMS released a statement late on Tuesday confirming that the AFFC will be discontinued at the end of the current year, bringing to an end 44 consecutive seasons of national competition.

The governing body had taken over the running of the national series prior to the start of the 2013 season due to financial pressures for the previous management that are said to have stemmed largely from a rollback in funding from Ford.

McConville, who is an existing CAMS ambassador, the recently appointed motorsport manager for Porsche and the current V8 Supercars driving standards observer, will work as the ‘driver development manager’ for CAMS from September 1.

Stressing that the discontinuation of the financially unsustainable national Formula Ford championship is an opportunity to create a more successful path to Formula 1 for young Australians, CAMS CEO Eugene Arocca outlined McConville’s responsibilities to Speedcafe.com.

“We have entrusted Cameron with coming up with a plan to support and develop a formula for the development of drivers that feeds into international success,” said Arocca.

“Cameron is going to be spending six to eight weeks finding as much information out as he can to get CAMS a real road map forward for driver development.

“Developing the Daniel Ricciardos and Mark Webbers of the world can’t rely on luck. A lot of those stories are of luck and good fortune, and we want to make sure that we actually provide a pathway that’s based on raw talent.”

Arocca says CAMS will closely analyse the suitability of the FIA’s new Formula 4 class, which the international governing body is pushing to roll out in national markets from 2014.

The FIA Formula 4 concept features a control 1600cc engine package, of which the marque can be different in each region. Production of carbon-monocoque chassis for the wings-and-slicks formula will be open to multiple manufacturers.

FIA Formula 4, which is not to be confused with Jonathan Palmer’s new-for-2014 BRDC Formula 4 in Great Britain, is aimed to sit between karting and Formula 3 in Europe. Whether two wings-and-slicks categories would be sustainable in Australia is currently unclear.

“The FIA is very keen for the Asia Pacific region to have a Formula 4 engagement… (but) we need to make sure that we tick all the boxes before we go down that path,” said Arocca.

Notably, the British Formula Ford Championship is currently in discussions with the FIA to morph into Britain’s domestic FIA Formula 4 series; a move that would see the 1600cc EcoBoost engine, which was only introduced this season, married to new F4 chassis.

It is abundantly clear that any new plan for open-wheel racing in Australia will be geared heavily towards promoting talent onto the world stage, rather than to the domestic V8 Supercars Championship.

“Certainly if there are some drivers that can compete in V8s (V8 Supercars) that’s all good and well, but the reality is that motorsport needs participation at the highest levels and Formula Ford isn’t exactly what you’d call a natural feeder towards Formula 1.”

Despite the demise of the CAMS championship, a national Formula Ford competition could still be held next year.

The Formula Ford Association, which is the representative body for Formula Ford in Australia, released a statement on Wednesday afternoon declaring its intentions to maintain a national platform.

“We believe that the gap between go-karts and senior categories is best filled by Formula Ford and this has been proven over the years,” said FFA chairman John van Leeuwen.

The events that such a series would run with are unclear, with the statement adding that “the nature of the 2014 series is yet to be confirmed but will be announced in the near future”.