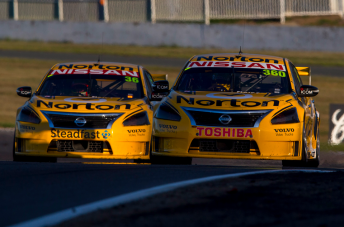 After months of deliberations, V8 Supercars trialled a 70 percent ethanol blend fuel, down from the regular 85 percent, in three cars at Winton; a move which dominated paddock discussions over the weekend.

V8 Supercars switched the trio back to the regular E85 on Sunday after two of the entries, the Norton Nissans of James Moffat and Michael Caruso, took a one-two finish on the E70.

Current championship leader Jamie Whincup proved most public with his displeasure at the situation, declaring on the typically conservative V8 Supercars-produced television broadcast on Saturday that the Nissans had “some jungle juice in the car now which has given them a bit of a leg up”.

Whincup confirmed to Speedcafe.com after the meeting that he believes V8 Supercars’ claims that no performance advantage was gained from the new blend, but is highly critical of the way that the parity process is being handled.

“It’s unfortunate for the Nissan guys because they did an extremely good job, and I believe that they still would have won the race even if they were on the standard fuel,” he said.

“I’m not taking anything away from them, but we have to keep V8 Supercars honest by asking the question; ‘have you made the right decision fixing parity via petrol?’.

“Fuel is not the way to adjust parity. You can put it in the same category as tyres and weight (handicapping).

“We all saw the response on social media and that (the fan reaction) doesn’t lie. No one out there wants parity adjustments based on tyres, fuel or a parachute out the back of one car or anything like that. It’s not right.”

While some members of the paddock themselves took to social media to make jibes at Nissan’s win, others more quietly grumbled about the last-minute, band-aid nature of the solution.

The fact that four-valve engines were going to be become eligible for the championship had been first announced with the Car of the Future concept in March, 2010, while economy has been a clear issue since pre-season.

V8 Supercars, however, insisted that having promised new manufacturers a parity formula, something had to be done before the all-important enduros.

“The technical division and the whole motorsport department absolutely understands that the technical integrity of the category must be maintained,” V8 Supercars’ motorsport manager, Damien White, told Speedcafe.com at Winton on Sunday.

“(But) it’s no good for anyone in this industry if those cars (the Nissans and Mercedes) go to say, Bathurst ,and have to do one or two extra pitstops. They may as well not turn up.”

White described Whincup’s ‘jungle juice’ remarks as “unfounded and almost immature”, although added that he was personally fine with drivers showing passion in such a situation.

“I won’t be fake and say that I’m happy when I’m not happy,” promised Whincup in return. “I don’t want to be smiling and be the ‘people’s choice’ if something is not right.”

With the Sandown 500 now less than three weeks away, all parties are understandably keen to find out whether the E70 blend, or another economy-focussed parity fix, will be ratified for use in the coming races.

Ryan Maddison, CEO of the Erebus Motorsport Mercedes outfit which ran the alternative fuel in its Maro Engel-driven car at Winton, is hopeful that V8 Supercars will approve the use of the E70 for all four-valve engined cars following its post-Winton analysis.

“We see the E70 as a nice, economical way to achieve parity without requiring a spec change to the car,” he said.

“If it’s not allowed and another measure (to achieve fuel parity) is employed we’ll work with V8 Supercars on that. (But) we clearly need an answer as soon as possible.”

The E85 fuel was first introduced into the V8 Supercars Championship in 2009, with the ethanol component produced using the non-edible by-product of sugarcane farming.