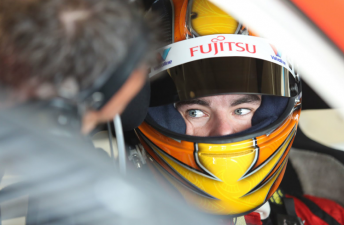 Scott McLaughlin made what he describes as the biggest mistake of his rookie V8 Supercars season to date at Winton, and it had nothing to do with his driving.

The 20-year-old posted onboard vision of the opening lap of Saturday’s Race 25 to his Facebook account which had come from the mandatory V8 Supercars judicial camera inside his Fujitsu GRM Holden.

Stewards found that the post breached V8 Supercars rule B3.2.6, which states that “teams are permitted access to the video images recorded by the Cameras, however, the footage is “strictly for private internal Team purposes”.”

McLaughlin was handed a $5,000 fine for the post, with $4,000 suspended until the end of the calendar year.

“It was an absolute rookie mistake and it’s probably the biggest mistake I’ve made all year to be honest,” McLaughlin told Speedcafe.com.

“It was my fault, I didn’t look at the rules and I probably should have known better. I thought it was a cool thing for the fans to see but I understand why the sport is very restrictive on what can be used and what can’t.

“Facebook is a great way to interact with the fans and I’m going to keep active on it, but I’ve read the guidelines now so that I don’t make the same mistake again.”

A V8 Supercars spokesman confirmed that the regulation preventing public display or distribution of the onboard footage by teams exists to protect both the judicial process and the television rights holder’s exclusive right to on-track footage.

McLaughlin currently sits 10th in the V8 Supercars Championship heading into the Sandown 500, where he’ll be paired with Dunlop Series front-runner Jack Perkins.