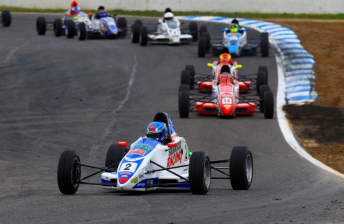 The Formula Ford field in action at Winton last weekend

The Australian Formula Ford Championship will be discontinued at the end of the current season, the Confederation of Australian Motor Sport has announced.

In a statement, CAMS cited the withdrawal of funding from Ford as the primary reason for the class’s eventual demise at national level.

State level Formula Ford championships are set to continue, while an annual national festival is being assessed.

National Formula Ford competition began in Australia in 1970, with the class graduating to CAMS championship status in 1993.

“As much as CAMS would like to see a thriving national Formula Ford competition, this has been and will be difficult to achieve,” said CAMS chief executive Eugene Arocca.

“We agreed to run the category in 2013 when the category manager at the time was not able to continue doing so due to financial pressures – primarily a result of the withdrawal of important funding from the manufacturer.

“Those pressures have not eased and despite careful management of the category this year by CAMS, we simply cannot justify the time and money it will take to continue doing so beyond 2013.”

Anton De Pasquale leads the standings following a sweep of all three Winton races at the weekend, while Macauley Jones is just eight points adrift.

See below for the national Ford Ford honour roll