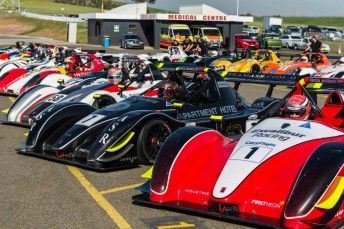 The Radicals will take to Bathurst for the first time

The Radical Australia Cup will make its Mount Panorama debut in February as a support to the Bathurst 12 Hour.

Event organisers have confirmed that the one-make sportscar class will join Improved Production and HQ Holdens on the support bill.

A strong field of cars, spread across the V8-powered SR8 and four-cylinder SR3 models, are expected to take the grid for the two Radical races.

Several professional drivers have been seen in the Radical Cup in recent seasons, including James Winslow.

The Briton is expecting the Radicals to be pushing the two-minute barrier around the famous circuit.

“The SR8s will be doing more than 280km/hr down Conrod Straight and will be incredible to watch across the top, thanks to their downforce and aero,” he said.

“It’s hard to predict their lap times, but at Sydney recently we lapped two seconds faster than the same GT3 vehicles that race in the 12 hour, and we’ve seen that they can do 2m04s at Bathurst.”

Entries for the Bathurst 12 Hour itself are currently frozen while the organisers deal with a surge in interest in the event.