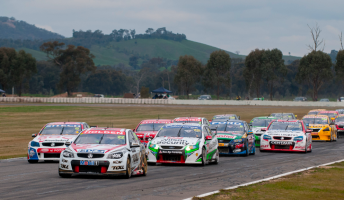 After a horror run for points leader Jamie Whincup in recent races, the battle for the V8 Supercars Championship title appears more wide open than ever.

Just 245 points separates the top nine drivers following the weekend’s Winton event, which managed to produce the 11th and 12th different winners of the year to date.

Although Red Bull had shown signs of its previously dominant form earlier in the season, all teams have struggled to perform consistently while learning and developing their new Car of the Future-specification packages.

Nine races over five events remain in the title battle, with the next three comprising endurance events with co-drivers.

In last week’s Pirtek Poll, Speedcafe.com’s readers emphatically voted James Courtney’s new-for-2013 partner Greg Murphy as the pick of the part-timers, with the Kiwi the man of choice for over a quarter of the near 8,000 respondents.

Courtney proclaimed his title credentials by breaking an 82 race winless streak on Sunday, promising too that there is more to come from the Holden Racing Team’s technical department ahead of the Sandown 500.

To score a second title, the former Formula 1 test driver will have to overcome the pairs of Red Bull Holdens, Ford Performance Racing Fords and Brad Jones Racing Holdens, as well as the Tekno Holden of Shane van Gisbergen and his own Holden Racing Team stable-mate in Garth Tander.

Who do you think will be performing the victory donuts at Sydney Olympic Park in December? VOTE NOW below.