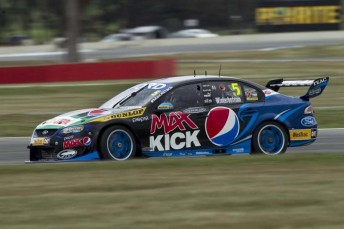 Winterbottom, who had not previously won at Winton, shot ahead of front-row starters Jason Bright and Tony D’Alberto to lead into the first corner.

The real drama, however, unfolded behind, with Alexandre Premat causing a multi-car accident as he rejoined from an off at Turn 2.

Upon the restart, Winterbottom soon built a two second advantage over Bright, before the Team BOC Holden began to claw it back.

The pair eventually crossed the line 0.4s apart, with Bright having proven quick enough to catch but not pass his rival.

James Courtney got the better of D’Alberto for third with eight of the 34 laps remaining after an extended battle.

The latter was able to hold out Shane van Gisbergen and David Reynolds in the closing laps to score a career best result.

Saturday winner James Moffat benefited from the opening lap carnage and solid race pace to climb from 25th on the grid to 11th.

A 12th place for Craig Lowndes ensures that Whincup’s lead over his team-mate has shrunk to 55 points.

See below for the full Race 26 result