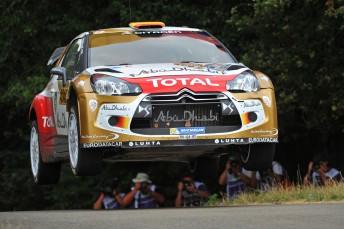 The twists and turns of Rallye Deutschland have continued with Jari-Matti Latvala seeing his chances of winning end as Dani Sordo put his Citroen in the lead.

Sordo will take a lead of less than one second over Ford’s Thierry Neuville into the final leg after a dramatic and tragic day in Germany.

An accident involving a historic car during a demonstration run over one of the stages killed both the driver and passenger, with organisers cancelling the final stage of the day. 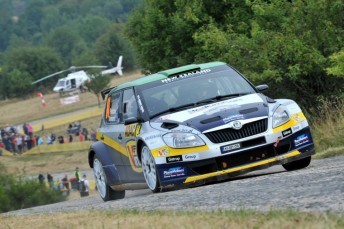 After his team-mate and World Rally Championship leader Sebastien Ogier crashed sustained and heavy suspension on Friday, it was Latvala’s turn on Saturday to retire from the leg. First issue came when co-driver Miikka Anttila’s door would not close upsetting Latvala’s rhythm in the car. Then his day ended after he damaged the suspension on the VW and then went off the road in wet conditions.

The Finn will return for Sunday’s two stages under Rally2 conditions.

This should have put Neuville in the lead, but he too left the road and dropped just behind Sordo.

The final leg only has two stages, but with the gap so close there is plenty to play for.

With a number of other retirements, former F1 driver Robert Kubica is now fifth overall and leading the WRC2 category with Kiwi Hayden Paddon third in that division and eighth overall.

“Tomorrow is a shorter day with just two runs through the same 24 km stage, but continued rain will mean conditions will be slippery,” said Paddon.

“With over eight minutes to Subhan Aksa in fourth, we now just need to bring it home for what would be a good result.”