Reeves makes it four on the trot in America

Reeves makes it four on the trot in America 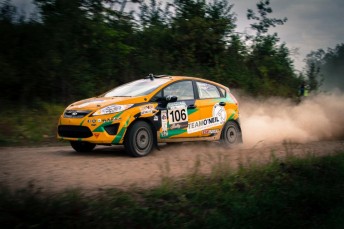 Brendan Reeves has starred again in the US

Australian Brendan Reeves has again stamped his authority on the US Rally Championship, winning the 2WD class for the fourth time in four starts.

Reeves and co-driving sister Rhianon Smyth topped off their successful weekend by finishing the rally third outright, an impressive effort in a 2WD car.

Reeves started the sixth round of the series, the Ojibwe Forests Rally, as he finished – in dominating form – and finished with a lead of over six minutes. In front of him was turbo-charged 4WD entries including winner Ken Block.

Held in the Detroit Lakes area of Minnesota, the event was run in hot conditions with many crews struggling with lingering dust on the stages, particularly on the three stages run in the dark on the rally’s opening day.

Going into the Ojibwe Forests Rally, Reeves was sitting second in the 2WD title race having not contested the opening two rounds. With another convincing win he has bridged the gap to current leader, Andrew Comrie-Pickard, with one round remaining. Comrie-Pickard finished this weekend’s event third in class after a rollover on day 2. If Reeves can win the final round and Comrie-Pickard finishes lower than second, Reeves will clinch the 2WD Rally America title for 2013.

Reeves and Smyth will now return to Australia where they will compete in Coates Hire Rally Australia, the fifth round of the Australian Rally Championship, in a Mazda 2 for RallySchool.com.au.

The final round of the Rally America series is the Lake Superior Performance Rally to be held on October 18 and 19.